The L Word wiki
Register
Don't have an account?
Sign In
Advertisement
in: Characters, Female characters, Lesbian characters,
and 5 more

Angie is the daughter of Bette Porter and Tina Kennard.

After seven years together, Bette Porter and Tina Kennard have decided to start a family.[7] Tina has given up her career as a film studio executive at Bette's urging[8] so as to carry their child, leaving Bette as the sole breadwinner.[9] The couple have been looking for a suitable sperm donor, with Bette insisting that the donor be an artist[7] of a calibre good enough to have made the Whitney Biennial exhibition.[10]

Bette eventually settles on Marcus Allenwood, an artist she is acquainted with and who meets her criteria, as the sperm donor.[7] While Tina is initially worried about the complications of using a black donor,[7] she later changes her mind and they go through with the insemination.[11] However, Tina's first pregnancy ends in a miscarriage.[12]

Seeing how much Bette struggled with the loss of their unborn son, Tina decides to get pregnant using Marcus' sperm[13] again, without telling Bette until she was sure the second pregnancy would go smoothly.[14][15] By the time Bette finds out about the second pregnancy, Bette and Tina have already broken up due to Bette's affair with Candace Jewell.[16][13]

Bette wants to be a part of the child's life and while Tina is unsure at first,[13] she agrees to raise the child with Bette.[17] Bette and Tina bond over their unborn child and eventually get back together. Not long after, Tina goes through a nearly fatal childbirth and Angelica is born.

She has black hair and with streaks of blue.

Quotes by or about Angie from The L Word and Generation Q.

Bette: "Tina may have given birth to her, but, really, Angelica is the mirror of me. I mean, I know what she's going to experience as a biracial girl growing up in a divisive world. I mean, let's face it, when Tina goes out in public with Angelica, people automatically assume that she's been adopted. But when they see me with Angelica, they see a mother and a daughter. I'm the one who's going to be able to give her a sense of belonging."
Joyce: "Wow. Okay. How do you think Tina will react to this?"
Bette: "Look, you know what? All I know is that when I saw Angelica about to go out the door today with Tina and Henry and little fair-haired Mikey, I just...I just wanted to fucking scream, you know? Because I do not want my daughter growing up in a house where she feels like an outsider because everyone else is white, and when she looks around she doesn't see another familiar face that looks like her own. You know, she's going to get that enough as it is in the world at large, and I know-- I know what that feels like. Angelica belongs with me."
-- in "Last Dance"

Tina: "How could you do that? How could you make all those decisions without me?"
Bette: "What do you mean? I didn't make this decision without you. We both decided, Tina."
Tina: "No, we decided nothing of the sort. Angelica should go to Beverly Montessori. There is no way we are going to pay $18,000 for preschool."
Bette: "We will pay whatever it takes to get her the best education available."
Tina: "Beverly Montessori is a wonderful school, and it happens to be very close to my house."
Bette: "That is not a factor."
Tina: "So you're gonna make Angelica take a two-and-a-half-hour car ride every single day so she can go to preschool with Diane Keaton's kids?"
Bette: "No! I will make sure that she goes to the best school, period. The best school! Period!"
Tina: "You know what? Fuck it! I don't even know why I bother. You clearly decided all of this without me. And you know what, for the record, I am not going to let your overachieving, psycho dysfunction stress out our kid before she's three years old! It's just fucking preschool, for god's sake. Crayons and playdough."
Bette: "No, it is not just crayons! It is a fucking Ivy League education. So naive! Jesus!"
-- in "Luck Be a Lady"

Bette (about Tina): "Are you sad about her getting married?"
Angie: "Yeah. I guess a tiny part of me always hoped that you two would get back together."
-- in "Lapse in Judgement"

Angie: "You never let yourself be sad."
Bette: "What do you mean?"
Angie: "Well, mom left and then aunt Kit died, and, like, I see you. You just..."
Bette: "What?"
Angie: "You just kept going."
Bette: "I think that I felt that if I truly let myself grieve, then that would mean saying a final goodbye, and I wasn't ready to do that. I guess I just try to outrun my feelings."
-- in "Lapse in Judgement"

Angie: "You know, my moms would always say I could be president or Supreme Court judge, but whenever anyone would ask me, like, 'What do you want to be when you grow up?' I would say Snoopy. 'Cause I was four, and it seemed doable."
-- in "Lake House" 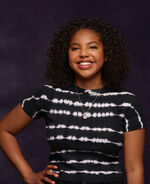