The L Word wiki
Register
Don't have an account?
Sign In
Advertisement
in: Characters, Female characters, Lesbian characters,
and 4 more

"Legend in the Making"

Cherie is a wealthy Hollywood socialite.

Quotes by or about Cherie from The L Word and Generation Q.

Shane (to Cherie): "You know, my entire life, people have said that I would become a psychopath if I didn't learn how to feel. But I wanna know, Cherie, what the fuck is so great about feeling? Because I finally let myself. And I feel like my heart's been completely ripped out."
-- in "Limb from Limb"

Shane (to Cherie): "I had this insane idea that you and I could be together."
-- in "Limb from Limb"

Cherie (to Shane): "What if I did? What difference would it make? What if in the time that we spent together, I felt more alive than I have in the last 20 years of my life? What if that were true? Do you think that I would leave my husband? My child? My houses in Bel Air and East Hampton, my trips to Paris, my black-tie galas? To run to some rank little love nest, with a 25-year-old assistant hairdresser who barely has her foot in the door? In this fucking ugly world, that kind of love does not exist."
-- in "Limb from Limb" 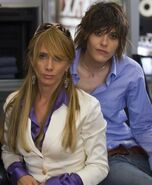 "Legend in the Making"