Dani and Gigi first officially met in season 2 when Bette introduced Gigi to Dani because Dani was looking for a new apartment after she and Sophie broke up. They had both been to Shane's birthday party in season 1 but they didn't know each other personally even though they ran in the same circle.

At first, they were friends- Gigi could sense that Dani was heartbroken after being cheated on and left at the altar by Sophie and befriended Dani after she sold Dani an apartment. Gigi took Dani out to dinner and provided her with a friendly ear. After Dani's father was arrested, Gigi continued to support Dani and consoled her on not just her breakup but also her father's incarceration and Dani's new role as CEO. At first, Dani seemed to feel guilty about spending time with Gigi because Gigi was dating Bette. But after Gigi informs Dani she isn't sure that she and Bette will work out, she tells Dani she wants to know more about her. Gigi and Dani bond over the similar culture- Gigi is Persian and Dani is half Persian (from her late mother) and they often converse in Farsi and Gigi shares stories of her family with Dani. Gigi proves to be a honest sympathetic friend that supported Dani when Dani had become an outsider with her friend group even though she was the one who was wronged. Dani began to let down some of her walls with Gigi and confided in Gigi that she always knew she and Sophie weren't right for each other and that she often filters her thoughts in private because she's afraid of hurting people and becoming like her father, and her grief and loneliness after the death of her mother when she was a child.

After a few weeks, Dani and Gigi's friendship begins to grow, and after witnessing Sophie serenading Finley in public further contributing to her pain and humiliation, Dani flees and Gigi chases after her and once again comforts her. While they are walking, Gigi informs Dani that her feelings towards Dani have changed and she has feelings for her. At first Dani is stunned and doesn't want to acknowledge Gigi's revelation but after a while, she admits that she does have feelings for Gigi too. She's worried about hurting Bette because her and Gigi had just ended their relationship. After a failed attempt at telling Bette about Gigi, Dani goes to Gigi's apartment late at night and finally expresses what she is truly afraid of, she's afraid that Gigi's feelings for her aren't real. After getting her heartbroken and losing her friends who had become her family, Dani understandably has trust issues and is afraid of getting her heart broken again. She worries that what Gigi feels for her is simply lust and that she is not real to Gigi. However, after they kiss, Gigi assures her that "it's real, it's very real." Gigi then asks Dani to come upstairs but Dani declines because she isn't ready to sleep with her yet.

A week later, after a fight with Bette over the CAC exhibit, Dani goes over to Gigi's loft and they have sex for the first time. Afterwards, Gigi holds Dani and tries to be affectionate with her but Dani is distracted because of her father's anger over Dani's charity initiative. Gigi questions Dani's father's treatment of her and Dani becomes defensive and leaves. Later that night Dani apologizes to Gigi with Beef Noodles and confides in Gigi that her father would often come between her and Sophie. She was embarrassed that Gigi saw how poorly her father treats her and Dani's inability to stand up for herself. Gigi comforts Dani by telling her that her own father was the same way and she hopes she didn't do anything to make Dani feel embarrassed. Dani assures her she didn't and she thanks Gigi for helping her stand up to her father. Gigi reiterates her feelings for Dani and they make up. 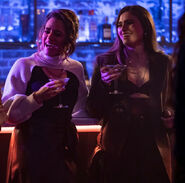