The L Word wiki
Register
Don't have an account?
Sign In
Advertisement
in: Characters, Female characters, Lesbian characters,
and 3 more

Helena Peabody is a main character in seasons two through six of The L Word. She is portrayed by Rachel Shelley and debuts in "Lynch Pin".

Helena is the daughter and sole beneficiary of billionaire heiress Peggy Peabody. Jealous of her mother's fondness for Bette Porter,[5] Helena initially positions herself as a romantic and professional foil in Bette's life. She eventually humbles herself and comes to truly care for Bette's friend group. Helena proves herself to be a loyal and kind-hearted friend, forming genuine friendships for the first time in her life, particularly with Alice Pieszecki.[6]

Because of her sheltered upbringing, Helena is incredibly naive and generous with money, which often gets her into trouble. After Helena's altruism is exploited by con artists such as Dylan Moreland and Gabriel McCutcheon, Peggy cuts her daughter off financially to teach her a lesson. Helena initially struggles to fend for herself in the real world, but comes to enjoy being self-reliant and making her own way in life.

Helena is the only child and sole beneficiary[7] of Peggy Peabody, the billionaire heiress of United Steel.[8] After fleeing a brief same-sex relationship in the early 1970s, Peggy was briefly married to Helena's father, a penniless British aristocrat. Helena was born in England around 1974 and presumably lived there for the majority of her life before moving to New York.

Helena was in a relationship with Winnie Mann for years, and Winnie is the birth mother of their son Wilson. The couple later adopted a Chinese girl named Jun Ying. Prior to Helena's introduction in The L Word, Helena and Winnie broke up and began a custody battle over their children, both of whom split their time between their two mothers.[9][10] Helena had a few sex-related legal problems, and every time her mother came to her rescue. After Peggy's retirement and Helena's appointment as the new director of the Peabody Foundation, Helena moved to Los Angeles.

Helena rarely saw her mother growing up, a fact she remains bitter about as an adult.[10] Peggy's admiration for Bette Porter, whom she sees as the daughter Helena could never be, left Helena feeling inadequate and,[5] unbeknownst to Bette, Helena grew resentful of her though the two had never met.[5]

Helena is first introduced in the series as the new director of the Peabody Foundation, when her mother Peggy decides to retire. Her first interaction with the major characters of the series occurs when Bette Porter visits her at the Peabody Foundation headquarters in New York City to try to convince her of the importance of keeping funds for arts projects at the California Arts Center. However, Helena shifts the foundation's focus away from the arts and towards community service, cutting all funds to the CAC and awarding the biggest grant to Tina Kennard's organization, Headquarters for Social Justice.

After meeting Tina in Los Angeles, Helena tries to seduce her, and also notices her pregnancy before Bette is informed. Tina and Helena thus start an affair[2] that lasts for the second half of the season. During this time, Helena moves to Los Angeles and tries to get more involved in Tina's life. At the same time, she becomes part of the board of the CAC and brings in Leo Herrera, who outshines Bette. Herrera's achievements lead the CAC to buy out Bette's contract during the second season finale.

Helena has two adopted children, but does not always live up to the custody agreement. The children appear to accept Helena's many affairs, often asking if her lover can come along with them on activities such as swimming or going to the zoo.

During the third season, Helena buys a movie studio and, despite how her relationship with Tina ended, she brings her in to work with her as an executive producer of the studio. She becomes friends with Alice Pieszecki, whom she thinks might be a new love interest after an unclear tarot reading, and she tries to help her come out of depression after the break-up with Dana. Further into the season Helena gets involved with Dylan Moreland (played by Alexandra Hedison), and is eventually charged with a sexual harassment lawsuit (as Dylan was only using her to gain money). Off-court meetings of this lawsuit presented in unveil Helena's past: in 1998, Helena was sued for sexual harassment; the claim was settled out of court. In 2002, Helena violated a restraining order filed against her by her psychiatrist. She agrees to settle off court.

Helena helped Dana somewhat in her last days of her battle with Cancer and was at her funeral. She also supported the fundraiser for Max Sweeney's gender reassignment surgery, and paid for Shane's wedding during the third season finale (where she makes the disastrous decision of giving Gabriel McCutcheon money which he used to run off leaving Carla, and which triggered Shane to also leave Carmen at the altar). At about this time, her wealthy mother cut her off financially.

After being cut off by her mother, Helena becomes Alice's roommate for the fourth season, time during which she discovers the Chart, gets fired from her own movie studio, and has a one-night stand with Papi.

The spoiled Helena, who has never really had to work before, is depicted having a hard time finding a job. After several unsuccessful attempts, Shane brings her into WA to be the receptionist, but she proves to be unsuited for the job and quits. Further on, Alice convinces Phyllis Kroll to hire Helena as a caterer for a party from which she ends up without profit after an incident in the kitchen.

Helena later joins Shane and Alice at the Roll the Dice movie premiere party. Here, she meets Catherine Rothberg, an actress who invites her to play poker at her high stake game. Helena loses and is in a struggle to pay her debt of fifty thousand dollars as a penalty, but the actress agrees to spare her from the debt if she wins another card game at her house. If Helena loses, Catherine implies she will demand sexual favours from Helena. Helena initially has doubts about whether to attend the game, questioning whether or not she would become a whore, but decides to take Catherine on nonetheless. She ends up winning the game, but still embarks on an affair with Catherine, as it is now theoretically on her own terms.

Catherine seduces Helena into a world of high stakes betting on poker games and horse races, but the terms of their relationship seem unclear to the rest of Helena's friends. Even when Helena wins big, Catherine seems to keep the winnings (possibly because she was using Catherine's money to bet), and when Helena loses, it is Helena's problem (such as when she loses $100,000 on a horse race after a tip from Catherine doesn't work out as they hoped).

Helena is also forced by Catherine to ignore her children to do what Catherine wants. Towards the end of the season, she is also seen doing menial jobs for Catherine, all because Catherine bankrolls the wealthy lifestyle Helena craves. After Catherine makes a bet whether Shane and Paige will still be together in six months, with the stakes being a million dollars for Helena or Helena's services as a servant and sex slave for a year for Catherine, Helena snaps, and cleans out Catherine's safe.

Helena is sent to prison on charges of stealing money from Catherine. Due to her being a 'flight risk', her bail is set at an undisclosed, but high amount. While Alice attempts to contact Helena's mother, Helena is warned 'not to drop the soap'. Later, after being romantically entangled with another butch inmate named "Dusty", her mother Peggy Peabody bails her daughter out of prison. They both appear at The Planet and Peggy declares they will both be going to live in a country in Europe with no extradition treaty with the United States. Helena has other plans in mind and escapes out the back of The Planet. She confides in Shane, who is smoking a cigarette behind The Planet, and it is revealed that she has plans of retrieving the money that she stole from Catherine to set Dusty free and escape to a Polynesian island paradise with her, as is signified with the light fingering of a puzzle piece given to her by Dusty.

Later in the season Helena leaves Dusty and returns to L.A. in time to receive her ailing mother, who reinstates her heiress status. She learns of changes that happened during her absence. At her mother's encouragement, Helena takes over both SheBar and The Planet from Dawn Denbo. In the process, she also claims Denbo's Lover Cindi (Cindi Annabelle Tucker) as a prize.

Helena resumes her relationship with Dylan Moreland in season 6, after "testing" her in order to estimate whether Dylan is after her money and wants to exploit her again or actually cares for her.

The table below shows the complete known history of Helena's romantic relationships.

Quotes by or about Helena from The L Word and Generation Q.

Bette: "Helena, the arts are the vitality of Los Angeles. We are setting the cultural agenda for the rest of the country. The federal government has completely abdicated! We depend on private support, and the Peabody Foundation is like a beacon. Helena, civilizations wither and die without the arts."
Helena: "Very dramatic."
-- in "Lynch Pin"

Peggy (to Helena): "And now, because I love you so very much, I'm going to do something truly radical. Sweetheart, I'm cutting you off financially. From this moment forth, you are going to have to make relationships with people who love you for yourself, not your money. This is going to turn your life around, darling. You're such a wonderful girl, such a beautiful girl, with such a surprisingly kind heart. You need to know that people love you even if you are penniless."
-- in "Left Hand of the Goddess"

Alice: "I think you should move in with me. I mean just, you know, until we get you on your feet."
Helena: "Alice, I couldn't."
Alice: "Helena, you have been, like, the most generous friend to me, and I feel like this is the first time I have something to offer you in return. It's going to be okay. We're going to help you through this."
Helena: "I just...I had no idea it could feel this warm and fuzzy being poor."
-- in "Legend in the Making"

Peggy (to Helena): "Peabodys don't have debts, darling. Not to anyone, and certainly not to society."
-- in "Lady of the Lake"

Alice (to Jenny): "Bad vibes. You and Shane should work your shit out, 'cause this place is becoming like the black hole of Calcutta."
Helena: "So good to see we're still asunder; nothing like a little dyke drama to tear the place out."
Alice: "That's what I'm saying. Bad vibes, man."
Jenny: "Helena, why don't you come and sit with us?"
Helena: "No, I'm not picking sides, alright? I love you both. Going for a run."
Kit: "Go Switzerland, hm."
-- in "Least Likely"

Dylan: "Helena is the love of my life and I would give anything for another chance to be with her."
-- in "Leaving Los Angeles" 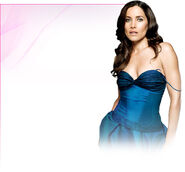 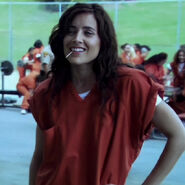