The L Word wiki
Register
Don't have an account?
Sign In
Advertisement
in: Characters, Female characters, Lesbian characters,
and 5 more

Jennifer Diane "Jenny" Schecter[1] is a main character in The L Word. She is portrayed by Mia Kirshner and debuts in the series premiere.

Sensitive and brooding, Jenny channels her trauma and experiences into her creative writing. She is a self-professed "dysfunctional liar"[13] and often loses herself in vivid fantasies, detaching from reality as a way to cope with her inner demons. Her tendency to wallow in her own "darkness"[14] leads her to lash out in deeply self-serving ways. To others, Jenny comes across as "weird"[15] and "complicated",[4] while Jenny in turn feels isolated and misunderstood even by those closest to her.

Initially a fish-out-of-water from the Midwest, Jenny quickly embraces the Los Angeles lesbian community. She eventually flourishes into a successful author after numerous setbacks. However, her Lez Girls novel, based on the private lives of her friends, coupled with her delusions of grandeur and increasingly manipulative behavior, drives a wedge in her friendships. Yet, even in her worst moments, her best friend Shane McCutcheon continues to stand by her.

Jenny was raised in Skokie, Illinois, by her mother, Sandy Ziskin, and her stepfather, Warren Ziskin. An only child, she comes from an Orthodox Jewish family that regularly attends shul and observes Shabbat.[3] Jenny herself is able to speak Hebrew.[16][2] 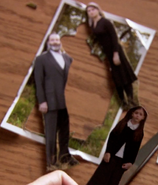 Childhood photo with Sandy and Warren.

Sandy and Warren believe that homosexuality is a sickness. They have a very traditional Jewish family and desire the same for Jenny. However, Jenny does not seem to consider Warren her father, only calling him by his name and correcting her mother when Sandy refers to him as Jenny's father. In Jenny's eyes, her mother is a subservient "silent slave" to a man who disrespects her, and Jenny refuses to follow the same path.[3] 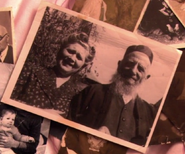 As a little girl, Jenny was gang raped by three older teenage boys in Skokie.[2][17] Jenny was so traumatized by the event that she tried to repress it from her memory, and as she got older, the memories became "blurry" and she could no longer differentiate the truth from her vivid imagination.[17] One of the boys who raped Jenny was wearing a t-shirt with a clown face on it[17] and as a result, many of Jenny's nightmares subconsciously feature a sinister carnival theme.[18] Even with the memories repressed, the trauma subconsciously made Jenny distrustful of people as an adult.[17]

While the rape was occurring, Sandy and Warren were nearby reveling with their friends, who were presumably the parents of the three boys.[16] Sandy and Warren found out about the rape afterwards and were devastated.[13] However, instead of helping Jenny overcome it, they refuse to talk about or even acknowledge it.[3][13] While Jenny still loves her parents,[13] she harbors a lot of resentment towards them, particularly her mother who she feels should have protected or comforted her at the time.[3] Jenny believes that because her trauma was not addressed when she was a child, it festered into a "pathology" that made her a "dysfunctional liar" for most of her young adult life.[13]

Sandy and Warren were revelling with their friends nearby, oblivious to the rape.

When Jenny was in third grade, one of her classmates Miriam ended up in the hospital for three weeks after eating a wild mushroom, and Jenny has been scared of eating mushrooms ever since.[19] Jenny lost her virginity at the age of 13 (discounting her rape which was repressed from her memory) to a boy named Andrew, while they were in the back seat of a car with their friends Todd and Amy.[20]

Jenny is an avid reader and cites Anne Carson's The Autobiography of Red and Eros the Bittersweet as books that practically changed her life.[7] She also considers The Gift of the Magi to be one of the most perfect stories ever written.[21]

As a college undergraduate, Jenny had a literature professor named Nick Barashkov whom she once gave a blowjob to.[22] Although Jenny thinks that Nick is a "pretentious asshole", she values his literary opinion immensely and remained on good terms with him after graduation.[22] According to her college roommate Annette Bishop, Jenny knew how to use her good looks to attract the attention of their male professors, showing an early propensity for manipulation.[23] Four years prior to The L Word,[24] Jenny began dating Tim Haspel while still in college, much to the annoyance of Annette who had to listen to them have sex while she was trying to sleep in the same room.[23]

Jenny and Tim were living together in Chicago, Illinois, when Tim moved to Los Angeles, California.[7] Meanwhile, Jenny was completing her Master of Fine Arts degree at the Iowa Writer's Workshop at the University of Iowa, and after six months apart, Jenny joins him in Los Angeles to start their new life.[7]

In season one, Jenny arrives to stay with her boyfriend Tim. On her very first night in Los Angeles, Jenny attends a party with her neighbors, Tina Kennard and Bette Porter, where she meets Marina Ferrer. They start an affair and though Jenny fights her feelings and questions her sexuality, she lies with complete ease to Tim and everyone else about her infidelity. When Tim finds out about the affair, he forces Jenny to marry him but then leaves her, unable to come to grips with Jenny's continued lying. Jenny later goes back to Marina, goes on a date with Dana Fairbanks (Erin Daniels), and briefly dates Robin (Anne Ramsay).

In season two, Tim decides to move out and leave town, his faith and trust in Jenny and humanity in general destroyed by her infidelity and unrepentant deception. Jenny becomes best friends with Shane and invites her to move into the half empty apartment. She begins a relationship with Shane's former hookup Carmen de la Pica Morales (Sarah Shahi), but Carmen eventually goes back to Shane. Jenny begins having flashbacks of her childhood in which it is revealed she was sexually abused, and also starts writing another book while taking a college writing class to improve her fiction-writing skills. Jenny's teacher accuses her of being a non-fiction writer because her prose resembles Jenny's own past. Mark Wayland (Eric Lively), a filmmaker who moves into the house to help pay their rent, begins spying on Jenny, Carmen, and Shane with hidden cameras. Jenny is hurt when the truth is revealed because she trusted him. Jenny becomes depressed and in the series finale she self-harms by cutting herself with razor blades.

In season three, Jenny is sent to a clinic in her Illinois home town to begin recovery from her self-harm habit and depression. There she meets Moira Sweeney (Daniela Sea), a CIS woman who identifies as a man. They begin a relationship and return to L.A. where Moira comes out as Max and begins the first steps of his transition. Max's hormone blockers result in his temper flaring and some aggressive behavior toward Jenny. Jenny later decides to end their relationship, citing that, as a CIS woman who identifies as a lesbian, a relationship with a person who identifies as a man does not work for her. Jenny also publishes her first novel, as well as writing a serialized story for The New Yorker featuring characters that are thinly disguised versions of her own friends.

In season four, the serialized story is turned into a stage play, then a film titled Lez Girls. Marina briefly returns during the play's run, portraying Jenny's character. Jenny realizes she is over Marina after being propositioned by her. Jenny also shows further unbalanced and manipulative behavior by adopting a senior dog to get close to a veterinarian who is the girlfriend of a columnist who gave Jenny's first novel a bad review. Pretending to be distraught, Jenny has the vet put the dog down. Jenny begins pursuing the vet as part of her plan to ruin her girlfriend's career. When Jenny is found out, she is accused of being manipulative and evil.

In season five, while filming Lez Girls, Jenny manipulates her way into a position as the film's director and hires Adele Channing (Malaya Rivera Drew), an alleged super fan of Jenny's, as her personal assistant. Jenny starts a relationship with the film's biggest star, Niki Stevens (Kate French), much to the dismay of the other cast and crew. While on a camping trip, Jenny and Niki make a private sex tape which Adele steals and duplicates numerous times. Niki, who is a closeted lesbian in public for the sake of her career, is shocked when Adele reveals her plans to send the tapes to the media if she is not promoted to director. Forced to hand the movie over, Jenny asks Niki and the other cast and crew to join her, but only Shane stands with her. Unable to agree because of her contract with the studio, Niki refuses and sends Jenny into a spiral. Shane later sleeps with Niki, leaving Jenny heartbroken.

Season six opens with the revelation that Jenny is dead. The series then reverts three months before the incident, picking up from the season 5 finale, and slowly detailing the many ways Jenny alienated her friends and, perhaps, provoked one of them to kill her.

Despite the ups and downs of her relationship with Bette and Tina, Jenny spends her final days putting together a film of memories for them after they decide to relocate to New York so Tina can start a new job. The film contains friends past and present sharing their best moments and Bette and Tina watch it with their friends during their going-away party. After Jenny is found dead in the swimming pool in their back yard, it's assumed that she either fell or was pushed from the landing above the back steps, which is unfinished and lacks a proper railing. The list of suspects is long of course, because Jenny offended, betrayed, and hurt so many people but after the many interrogations, Bette later says Jenny died by suicide.[25]

The table below shows the complete known history of Jenny's romantic relationships.