Natalie "Nat" Bailey[1] is a recurring character in seasons one and two of The L Word: Generation Q. She is portrayed by Stephanie Allynne and debuts in "Let's Do It Again".

Nat is Gigi Ghorbani's ex-wife and a therapist at the LGBT Center.

Prior to Generation Q, Nat and Gigi were best friends before dating and eventually getting married.[4] Nat is the birth mother of their two children, Olive and Eli, who were conceived using a sperm donor.[5] When Eli, the younger of the two, was little, he got very sick and had to be hospitalized. At the hospital, Eli kept calling out for "mama" even though both Nat and Gigi were right there. Nat realized Eli was calling for their friend Mona and figured out that Gigi was having an affair with said friend.[6] Nat refused to hear Gigi out and kicked her out of the house.[7] It took Nat and Gigi two years after that to be on good terms with each other.[8] After their divorce, Nat lost all her friends as they all took Gigi's side because she was the "cool one".[4]

Nat is a an attractive red head with beautiful ocean blue eyes. She has a medium, lithe frame. Her kind expressions compliment her innocent face.

Nat is quite an understanding person. She is often considerate but shown dejecting a handful of times. She later came out as polyamorous, which Alice was not able to accept, leading to their break up. It was shown Nat struggled with making friends, and people don't want to understand her. Her amicable relationship and camaraderie with her ex-wife and best friend Gigi, makes it easier for both of them to co-parent their son & daughter easily.

Quotes by or about Nat from Generation Q.

Nat: "I think I'm...uh...polyamorous. It's something that I thought I might be for a long time, and then I just denied it, you know? Pushed it down. I mean, coming out as gay was hard enough."
-- in "Lean on Me" 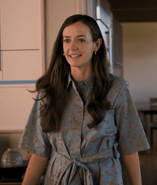 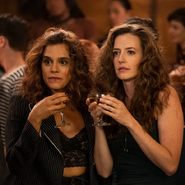