Papi is an infamous womanizer within the East Los Angeles lesbian community.[2] Her attitude towards life is to see and experience as many new things as she can.[8] She is connected to well over 1,300 women on The Chart, putting her ahead of everyone else including Shane McCutcheon.[7] Papi has several "rules" of conduct, the first being that she does not have breakfast the next morning with the women she sleeps with, and the second being that she never goes home with a girl whose roommate she just slept with that same day.[2] Despite her womanizing ways, every once in a blue moon Papi has genuinely fallen for someone.[9]

Five years before her introduction in The L Word season four,[4] Papi hit on the newly-out Tasha Williams at a West Hollywood lesbian bar called The Palms. Papi and Tasha had a one-night stand but found that there was no sexual chemistry between them.[5] Despite their very different views on life and relationships,[8] they became best friends after that.[5]

Papi works as a limousine driver.[2] She has a crew who she plays lesbian pick-up basketball games with at West Hollywood Park.[3]

When Alice makes The Chart into an interactive website, she finds that a woman known only as "Papi" has the most conquests, even more than Shane. Alice goes on a mission to find Papi to interview her for her radio show. After almost giving up, having run into nothing but imposters, Alice finally meets the real Papi. Papi sleeps with Alice after their date, then sleeps with Alice's roommate Helena the next day. Papi attempts to start a rivalry with Shane, whom she describes as just a "skinny white girl," but Shane is uninterested in challenging her. Papi is originally somewhat dismissive of Alice and her group of friends, believing they are too spoiled from living middle-class lifestyles, but soon befriends them. Papi introduces the others to her best friend, Tasha Williams, whom she originally met through an awkward hook-up. Papi is concerned for Tasha's well-being, as she has just returned from a tour of duty in the Iraq War, and wants her to meet some women instead of closing herself off. Although Papi is known for her sassy comebacks and obviously understands how to take care of herself, she's a truly kind person and very loyal friend.

Papi begins to fall for Kit, even though Kit is seemingly straight. After Angus cheats on her, Kit begins returning Papi's affections in order to make him jealous. Papi takes Kit to a bar where she buys her drinks, not knowing Kit's history as an alcoholic. Kit attempts to sleep with Papi that night, but is too drunk. Kit and Papi later do sleep together, but Kit is unable to orgasm, and tells Papi she just isn't attracted to women.

It is revealed in episode 3.09 "Lead, Follow or Get Out of the Way" that Papi was involved with Carmen when they were in high school. Carmen stated that the reason she didn't go to prom is because she ran off with a girl named "Eva Torres" who taught her how to 69. [1]

Her real name is Eva Torres, which was revealed by Tasha Williams during the end of Season 4.

Papi was not included in the cast during season five; no information regarding why has been released. It is most likely because the actress playing Papi was involved too many other international projects to work on season five. In addition, it is also widely believed that the character was not well-received by all of the show's fans, and has been criticized as a caricature of Latina women.

In episode ten of season five, Papi's long time friend Tasha mentions her name while explaining to Alice how Papi and she used to play basketball with the Coco Girls. However, there was still no mention of Papi's whereabouts.

Papi finally returns in the premiere episode of season six. Alice and Tasha have an argument, and Tasha considers moving out. Afterwards, Alice follows Tasha to the friend's house, and Alice does not recognize it. Alice is then surprised to see that it is Papi's home. Alice asks Papi where she's been, but Papi does not give a sufficient response. Papi is coincidentally in the process of bedding Alice's former lover Gabby Deveaux when Alice and Tasha turn up. When Papi and Gabby's lovemaking sounds in the bedroom become comically loud and theatrical, Alice and Tasha decide to return to their apartment.

Quotes by or about Papi from The L Word.

Papi: "See, everything about a woman, I love. Touching them, feeling their skin against mine, making them feel good. See, I respect them, and I respect myself. And, they like the way I kiss. I can make a woman come just by kissing her."
-- in "Livin' La Vida Loca"

Alice: "Oh, so you make a little team?"
Papi: "Yeah."
Alice: "Oh, my friends-- we could make a little team. It'd be good."
Papi: "What you going to call your little team, huh? The Bougie-Ass Girls?"
Alice: "No, more like the Kick-Your-Ass Girls."
Papi: "Oh, right, right. Well, just make sure you bring Vanilla Spice."
Alice: "You mean Shane?"
Papi: "Yeah, Shame. La Pendejita. Yeah, we're gonna hurt you so bad, look, you're already trippin'."
Alice: "Oh, yeah. Ooh, we're so scared to play basketball with Papi."
Papi: "Yeah, well, you should be, because we're going to whoop your asses all the way back to Rodeo Drive so you can go shopping, which is probably the only sport you can play."
Alice: "Oh, we'll be there, Papi, okay, and you can save the shit for the field, all right?"
Papi: "It's called the court."
Alice: "Whatever. It's on. It's so fucking on."
-- in "Layup"

Tasha: "Yeah, I know you, but you're a 'player', right? That shit is so old, Papi. Grow up, man."
Papi: "You know what? We just got different values. Different codes of conduct. It is what it is, man."
-- in "Lesson Number One" 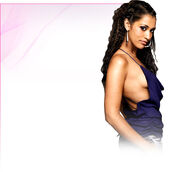