Phyllis Kroll is a recurring character in seasons four, five, and six of The L Word. She is portrayed by Cybill Shepherd and debuts in "Livin' La Vida Loca".

Phyllis is the Executive Vice Chancellor of California University.[3] She is married to Leonard Kroll and has two daughters, Molly and Sophie. Upon her introduction in The L Word season 4, Molly is a junior at Vassar College and Sophie is a freshman at Bennington College.[5]

When Phyllis was a sophomore at Wellesley College, she fell in love with her college roommate Jane Howard.[4][2] Phyllis has known she is a lesbian since, but was too scared to act on her feelings for her roommate at the time.[2] She continued to repress her attraction to women, even lying to her therapist about it, and instead married Leonard,[2] who was the first man to ask her to settle down.[8] By the time of her introduction, she and Leonard have not had a physical relationship with each other in years.[5]

Phyllis has a doctorate degree.[2] She is a highly accomplished woman in the world of academia and has written several books. When her second book was published, a reviewer from the Journal of Education and Policy gave her her first bad review, prompting Phyllis to publish a scathing rebuttal that got the reviewer fired.[3]

Quotes by or about Phyllis from The L Word.

Phyllis: "You're the most glamorous dean they've had in years."
Bette: "Matthew Reese was 85 and bald."
Phyllis: "Well, it's more about your background. Your show Provocations was a flash point for their generation. They all still seem to think you can change the world through art."
Bette: "So do I."
-- in "Livin' La Vida Loca"

Phyllis: "Have you ever had the conviction you've been living a lie your whole life?"
Bette: "No. Actually, I haven't."
Phyllis: "No, of course not. You're courageous. You live your life boldly, honestly. I wish I could take your example."
Bette: "Phyllis, you are a woman of incredible accomplishments. I cannot possibly see--"
Phyllis: "I think I'm a lesbian, Bette."
Bette: "Oh."
-- in "Livin' La Vida Loca"

Alice: "Wow! Wow. Fancy. I like this. This is good. A whole new Bette, huh? Artsy, a little artsy-fartsy going on here."
Bette: "We have a situation, Alice."
Alice: "What, are you going to stick me in the corner with a dunce cap on, Principal Porter?"
Bette: "My boss is attracted to you."
Alice: "Really?"
Bette: "Yeah. She thinks you two made a real connection. She said that you made 'meaningful eye contact' with her. Is that true?"
Alice: "She thinks I flirted with her?"
Bette: "Alice, this isn't funny."
Alice: "No."
Bette: "No, it's not. She wept in my arms because she's been unhappy for 25 years, and now she's dying to find out what she's been missing, and she thinks you sent her signals."
Alice: "She really thinks I sent her signals? Really?"
Bette: "Yes. And we have to do something about it. We have to let her down easy."
Alice: "Okay, okay."
Bette: "Alice, it's not funny."
Alice: "No, it's not funny."
-- in "Lassoed"

Phyllis (about Lez Girls): "Is it true that one of the characters in this book is based on you?"
Bette: "Who told you that?"
Phyllis: "Everyone's talking about it on campus. It's a cause célèbre. Let's see, '...the sexually predatory, emotionally abusive Bev,' that's you, 'who uses her professional stature to bed every girl and woman who crosses her path.'"
Bette: "I haven't even read the fucking thing. But I can't imagine that it has anything to do with me."
-- in "Literary License to Kill"

Phyllis (about Lez Girls): "Well, I just can't wait to find out what happens with Bev and the plumber."
Bette: "James? Can you get me a copy of that fucking book asap? And make sure you get a comp copy. I don't want to have to pay for it."
-- in "Literary License to Kill"

Phyllis: "Molly's exceptional. And I'm saying this not as her mother, but as the chancellor of a major university. Molly is one of the most brilliant students I have ever encountered."
Shane: "I'm not surprised to hear it."
Phyllis: "And you're not worthy of her."
Shane: "Excuse me?"
Phyllis: "In the first place, the summer internship is a once in a lifetime opportunity."
Shane: "First of all, Molly is a grown-up. And I'm not telling her what to do."
Phyllis: "This is not just about the damn internship. I know you know what I'm talking about."
Shane: "Yeah, Phyllis, and what I know is that I'm crazy about her."
Phyllis: "Bette says you're not the kind of person any caring mother would want her daughter to have a relationship with."
Shane: "I don't buy it. Bette would never say it."
Phyllis: "She says you'd be up and after the first little hottie who shakes her booty at you. And you know your friend Alice? She told me that the longest relationship you ever had is six months. You proposed to some poor girl, left her at the altar. Even your friends think you're bad news, Shane. You know what would really suck though? Is if you did the same thing to my daughter. Are you going to throw Molly away like a piece of garbage?"
Shane: "No."
Phyllis: "How do you know? How can you be sure you're not going to find someone else you can't keep it in your pants around?"
Shane: "Phyllis, you know that is not fair to say, because no one knows that until it happens."
Phyllis: "Most of us possess a certain amount of self-knowledge, Shane. Have you ever heard the expression 'past is prelude'? No, of course you haven't. This is not just about Molly's summer plans. Don't fuck my daughter over. If you even think you love her, spare her. Don't turn her into another one of your heartbroken victims."
-- in "Loyal and True"

Phyllis: "To tell you the truth, I've had my own struggle with attractions to subordinates. I've one crush that's been incredibly difficult not to act on them. You wanna know who it is?"
Bette: "I'd rather not."
Phyllis: "Oh, come on! Guess! It's someone you know."
Bette: "Phyllis, I really-- I have no idea, you know? And I thought you and Joyce were gonna get married."
Phyllis: "Joyce? Yes. But as Jimmy Carter once said, 'I've strayed in my mind's eye many times.' Especially with this particular person. But now that you're no longer my employee, I feel free to make my confession. Bette, I've always found you wildly, exquisitely attractive. Yes."
Bette: "Phyllis, no."
Phyllis: "Yes. From the moment I saw you, tall, strong, brilliant..."
Bette: "Don't."
Phyllis: "Erudite, incredibly...It was so difficult for me not to act on it. You can't imagine."
Bette: "Joyce?"
Phyllis: "Joyce is wonderful, yeah. Oh, yes, she's TCB, she's good in bed, makes a good living, tight with Mayor Newsom, but...if you gave me the smallest amount of encouragement, I would lose her in a second."
Bette: "You just fired me."
Phyllis: "I know, but it may be the best thing that ever happened to both of us. Bette, you are and will always be the woman of my dreams."
Bette: "You'll have my letter of resignation in the morning."
-- in "LMFAO" 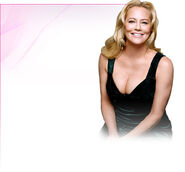