Tasha M. Williams[1] is a main character in seasons four, five, and six of The L Word. She is portrayed by Rose Rollins and debuts in "Lez Girls".

Tasha comes a military family; both her father and her grandfather served in the US Army, and Tasha has always felt a strong sense of duty to serve her country.[7] She was presumably raised in Virginia, where her parents still live.[3] Growing up, her father used to beat up her brothers, once beating up her older brother so badly that he missed three days of high school.[4] Tasha's mother would cover up her father's beatings.[4] Her father never paid any attention to her military achievements, even though she got more decorations than any of her brothers.[4] Tasha's mother is a huge fan of Kit Porter and owns her old records.[3]

Tasha graduated from California State University, Long Beach. While in college, she came out as gay and went to a West Hollywood lesbian bar called The Palms, where she was hit on by Papi. Tasha and Papi had a one-night stand but found that there was no sexual chemistry between them.[6] Despite their very different views on life and relationships,[2] they became best friends after that.[6] According to Tasha, Papi is not her type as she is into girly girls.[6] Upon her introduction in The L Word season 4, Tasha and Papi have known each other for five years, and Tasha sometimes joins Papi and her crew in their pickup basketball games.[8]

After college, Tasha signed up for the army and went through basic training, where she met her friend J.J. Jones.[9] She has just returned[8] from serving in the Iraq War,[6] where she was awarded with several distinctions including a Bronze Star Medal with 'V' for valor, two Army Commendation Medals, and a Joint Service Commendation Medal.[7] Tasha is now based in a military base in Los Alamitos,[2] while waiting to ship back out to Iraq with her unit.[1]

Tasha has a pretty conservative view when it comes to relationships, and is not into casual sex.[2] She thinks that flirting or even thinking about having sex with someone other than your partner counts as cheating, as it is intimacy you are giving somebody else. Tasha cheated on her first girlfriend Michelle by kissing another girl.[5]

Tasha lives in Long Beach, California.[2] She is into motorcycles and spends her free time working on her Triumph Scrambler. On the open road, she has driven her motorcycle up to 120 miles an hour.[8]

Quotes by or about Tasha from The L Word.

Tasha: "Yeah, I know you, but you're a 'player', right? That shit is so old, Papi. Grow up, man."
Papi: "You know what? We just got different values. Different codes of conduct. It is what it is, man."
-- in "Lesson Number One"

Tasha: "One of the things that's asked of us when we go to the front lines is that we be prepared to be separated from the people that we love. And we ask it of them, too. We ask them to go and let us fight for their freedom, maybe to never come home. And when we do come home, we feel blessed. It seems so wrong now to have my personal freedom denied to me within my own country. It seems wrong to watch the person that I love be interrogated like a criminal when she did nothing wrong."
-- in "Lay Down the Law"

Dan: "Who wants to tell me why you're here?"
Alice: "Oh, we're just here for a tune-up."
Dan: "Does that seem like an accurate assessment to you, Tasha?"
Alice: "She's the one who called it that. We've just had a couple of little-- little things come up lately."
Dan: "What sorts of little things?"
Alice: "Money. I make a lot more than she does."
Dan: "How's that make you feel, Tasha?"
Alice: "Resentful. She doesn't want me to spend as much because she can't afford it."
Dan (to Tasha): "Is that true?"
Alice: "Absolutely. We couldn't even get a bigger apartment because she couldn't share the rent fifty-fifty. And I also think she resents me because I don't clean as much as she does."
Dan (to Tasha): "Do you?"
Alice: "Oh, look, now she's mad."
Dan: "Is there anything else?"
Alice: "Tasha broke up with me last week."
Dan: "Really? Why did you break up with Alice, Tasha?"
Alice: "Because she thought I cheated, when I didn't even kiss the girl."
Dan: "Did you think about it?"
Alice: "Yeah, but, I mean, she wouldn't have even known if I didn't tell her. So I think the mere fact that I disclosed the information should count to something. Right?"
Dan: "But if you knew Tasha's feelings about the subject of cheating, why did you choose to tell her?"
Alice: "I think we're past it. I think what we have to work--"
Dan: "Alice, this is called couples' therapy for a reason. Now, Tasha, this process works much more effectively if you participate. Why do you think Alice told you?"
Alice: "She doesn't even want to be here."
Tasha: "I think that she told me because she wanted to break up with me, and bringing this woman between us was the easiest way to do that. She knew how I felt, she knew that I would break up with her, and when I did, she got scared. And that's why we're here."
-- in "Least Likely"

Alice: "Pros and cons list. My mother used to make these all the time to kinda decide whether she's gonna divorce her ex-husbands."
Tasha: "And that's the model we're gonna follow?"
Alice: "Well, she had very successful divorces."
-- in "Least Likely" 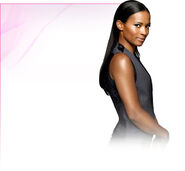 "Lay Down the Law"

"Lay Down the Law"