The L Word wiki
Register
Don't have an account?
Sign In
Advertisement
in: Seasons (The L Word)

< The L Word
Edit
watch 01:25
Jurassic World: Dominion Dominates Fandom Wikis - The Loop
Do you like this video?
Play Sound

The sixth season of The L Word contains 8 episodes and aired on Showtime from January 18 to March 8, 2009. A special epilogue, The Interrogation Tapes, was released online following the series finale.

The shocking murder of Jenny is told in flashback as each characters recounts the events leading up to the crime to the police investigators; Jenny and Shane start a sizzling romance while Jenny sells another script even as the negative of her movie goes missing; Bette and Tina plan to have another child, this time through adoption; after losing The Planet, Kit opens a new nightclub with partner Helena; Alice and Tasha have compatibility issues and a mutual crush on a third party.

Following the series finale of The L Word, Showtime released a series of seven short videos depicting Tina, Shane, Helena, Niki, Max, Alice and Bette being questioned by the police over Jenny's murder. The episodes were posted weekly on Showtime's website and served as an epilogue to season 6. 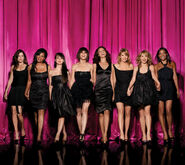